Stratum in the Press 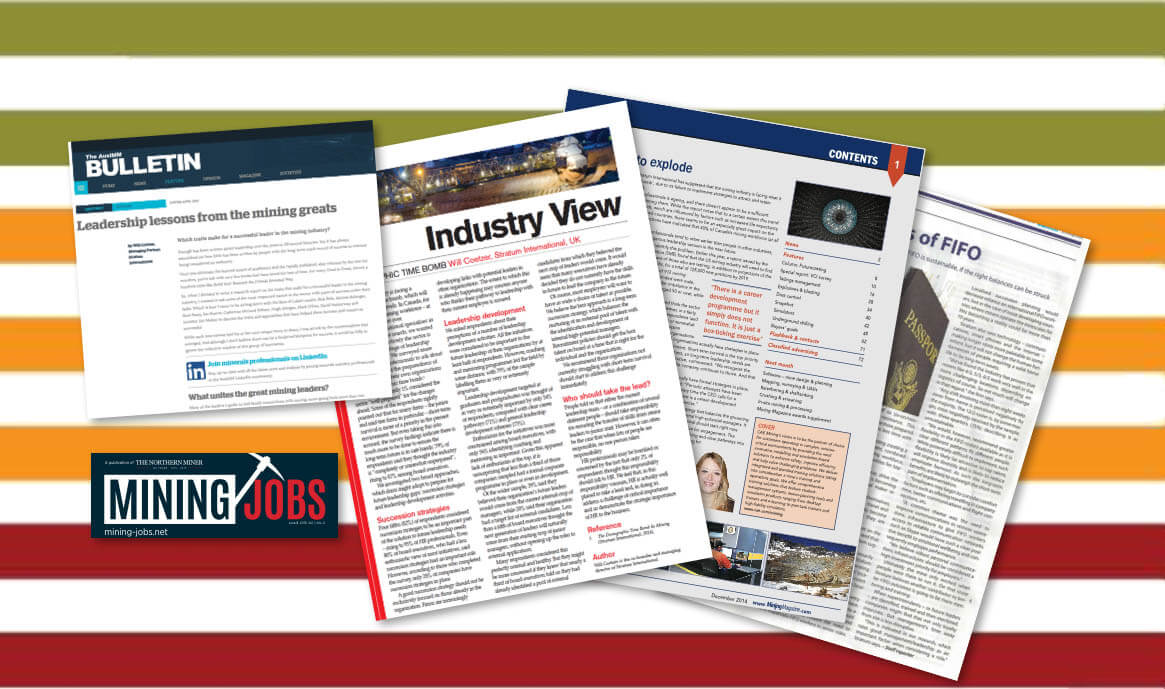 Stratum in the Press

Stratum International is frequently asked to contribute articles and comment in the sector press. Here is a selection of the articles to which we have contributed.

“For those working on remote sites, work-life balance is a key factor,” confirms Will Coetzer, Managing Partner of Stratum International… Referring to Stratum’s FIFO: A Global Perspective report, Coetzer adds: “97% of our respondents told us they were concerned about the impact FIFO had on their family life.”

“A new report from Stratum International has suggested that the mining industry is facing what it calls a ‘ticking time bomb’, due to its failure to implement strategies to attract and retain younger professionals. The population of mining professionals.”

“According to a new research report, half of senior mining professionals working fly-in-fly-out (FIFO) shifts believe that the industry needs a major rethink on the design of rosters and the related benefits.”

FIFO – Time for a Rethink PDF

The AUSImm Bulletin: Leadership Lessons from the Mining Greats by Will Coetzer

“Many of the leaders I spoke to had family connections with mining, some going back more than one generation, and most confessed to a childhood interest in the great outdoors, leading to the study of geology at university. But it was the decisions they made after joining the industry that secured their long-term success. I’ve identified seven themes that were mentioned by all or most of the interviewees.”

AUSIMM Bulletin – On the Shoulders of Giants PDF

“According to a survey by Stratum of more than 900 mining professionals, less than 24% of mining companies have programs in place that recognize the value of leadership development and provide career pathways for leadership roles. FQM is one of the mining companies that are actively pursuing such progressive corporate initiatives.”

“The mining industry faces a “ticking time bomb” because of its failure to take measures to retain or attract younger professionals at a time when the workforce is ageing, according to Stratum, the global recruitment agency.”

“Stratum International’s survey of nearly 600 industry people across the globe highlights general acceptance of the prevailing fly-in-fly-out culture with its high rewards but often punishing schedules. But it also points to the fact that ‘half of all the people we surveyed believe FIFO systems need a major rethink if they are to be sustainable’.”

In a recent survey, two thirds of senior mining managers and leaders told us they are either already looking for their next role or would consider a new role if the right one landed on their desk today. This begs the question: if the right opportunity came your way today, would your résumé be up to scratch for submission?

World Coal: A Demographic Time Bomb by Will Coetzer

“The mining industry is facing a demographic time bomb, which will affect the sector at all levels. In Canada, for instance, 40% of the mining workforce – at all levels – is aged 50 or over.”